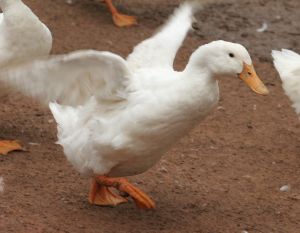 Our unwanted or non-laying birds typically go into tamales or similar dishes (young roosters are better for frying than old hens that need slow cooking).  We can’t simply keep nonproductive birds in such a small holding so we utilize them fully.

People are so removed from their food source that they can’t put a duck or chicken into a table ready meal.  Meat doesn’t appear in a plastic tray with a wrapper from nowhere.  If it’s not for you though, it’s not for you.

It is commendable that someone takes the time to collect birds that go unwanted like the woman at Ducks and Clucks and finds a place for them.  The birds were originally intended most likely to produce a meal in the form of eggs.  The last several decades, especially, there has been a lot of pushback about keeping food animals in the city or even in the suburbs, especially for meat.  It is becoming easier to keep them in the city as well as more popular.

Large scale farming is out of sight, so it is out of mind, and we can all breathe easier knowing that our frozen breast meat came from a micro managed environment where it did not have a name at all.  We didn’t have anything to do with it’s demise and processing so it makes it easier to consume.

Killing and processing your own poultry isn’t for everyone but to sensationalize a movement that has been around since the domestication of chickens and ducks into a ‘craze’ doesn’t seem like the appropriate way to view the situation.  You can move the people into the city but they still will want fresh eggs from their own home flock.

Tragedy Strikes When an Emu Runs Loose   It was a very sad night.  Someone …