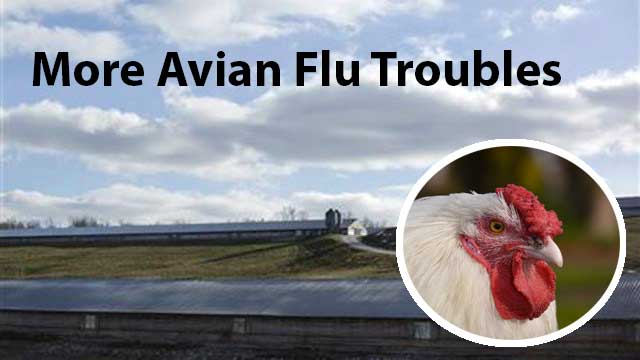 Around 400,000 turkeys and chickens will be euthanized in 10 Indiana poultry farms.  More than 150,000 chickens have been ordered destroyed because they are in the same area as the infected turkeys.   In addition to destroying nearly half a million birds, a six mile zone has been established to try to keep an eye on any further spread of the H7N8 virus.

Poultry bedding and droppings are often widely used in other agricultural arenas.  Beef cattle are fed poultry droppings in pelletized form, aquaculture uses poultry waste as feed as well, and as a fertilizer for agriculture in general.  Transporting untreated or uncomposted material may also be a way of spreading the avian flu.

The spread and evolution of the bird flu should be expected.  It is unfortunate that so many birds have to be destroyed to try to prevent the further spread of the disease in hopes of curbing it from infecting humans.  It isn’t likely to spread to humans but the more it occurs the higher the likelihood.

Wheatgrass Juice Without the Juicer

No Juicer Wheatgrass Juice Wheatgrass is healthy for your chickens as a supplement.  It is easy …