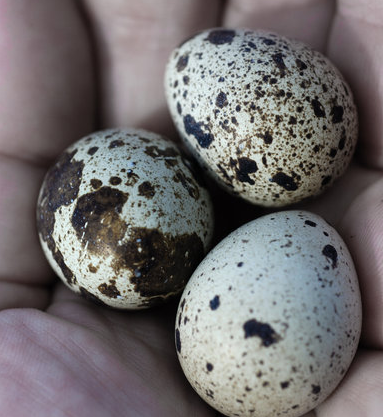 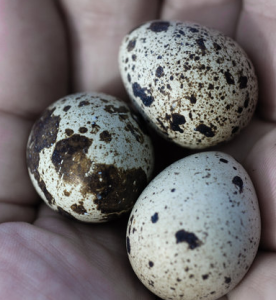 Keeping quail is gaining popularity with the permaculture movement.  Keeping food animals was popular during both World Wars as resources were limited.  Rabbits, pigeons, and quail were raised to supplement meat and make use of waste.  Saving resources was a big issue then, and it should also be one now.

Several suitable quail are available for the home grower.  Coturnix and bobwhite quail are most commonly raised of quail.  Coturnix quail have several varieties optimal for raising such as Jumbo Brown and Texas. Bobwhite quail have options to keep as well, among them being the Georgia Giant.

Jumbo brown coturnix grow the fastest of all of them.  The Texas A&M is a white feathered bird not as big as the jumbo.   The Bobwhite and the Georgia Giant Bobwhite are both slower growers but offer better taste in meat.

The Jumbo and A&M both are excellent egg layers and lay nearly every day.  Small brown speckled sushi eggs come from coturnix quail.  While Bobwhite quail also lay eggs they are not as proficient as Coturnix.  Coturnix can start laying at 6 weeks in optimum conditions while Bobwhite takes a little longer to mature and start laying at 16 weeks. 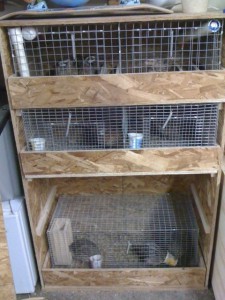 Quail all need higher protein levels in their feed and should be fed gamebird feed or equivalent.  28 percent protein feed is recommended.  Both birds will eat some table scraps to supplement feed and to make use of table waste.  Make sure not to feed too much non protein which will slow down growth and laying ability.

Coturnix mature at 6 weeks and can be processed younger.  They are easy and quick to clean and get ready for the dinner table.  Bobwhite are slightly heavier than than Coturnix especially the Georgia Giants and take longer to mature for meat and eggs.

Coturnix are relatively quiet and can be handled easier than Bobwhites.  Bobwhite are noisier than coturnix and aren’t as willing to be handled.  Bobwhites tend to make a bit of low volume grumblings, and are capable of the namesake Bobwhite whistle.  Coturnix can whistle but they tend not to.

Incubating the eggs of these quail is the only way to replenish the flock as they do not brood.  Taking only 16 days for Coturnix and 23 days for Bobwhites makes incubation manageable.  It is practical to have nearly continual egg batches in the incubator, chicks in the brooder, and birds laying or being processed for table fare.

The cycle is quick from egg to meat bird but the time taken to manage and care for these birds is minimal.  When kept away from diseased birds very few problems to occur in the cycle.  Managing the cycle is easy also.  You can regulate your flock by eating more or less eggs, birds, or hatching more or less.  It is easy to scale and customize quickly because of their needs.

Whether you live in a rural farmstead or a city lot quail can be a great way to supplement table fare.  The benefits are high and expenditures manageable for this fruitful bird.  Anyone enjoying raising birds for meat and eggs will be happy they chose to try them.