Building a DIY Poultry Egg Incubator on a Budget

Researching Before Building a DIY Incubator 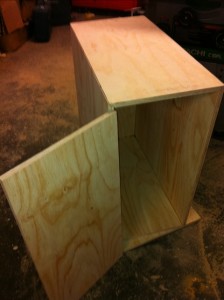 Anyone who wants to hatch their own eggs always has a lot of incubator questions.  There’s tons of information about them, especially brand reviews.  They come in many sizes, configurations, and qualities.  There also is a wide range of prices and models.  When first learning about incubators it seems like an impossible task to build your own.  It is quite possible to build an incubator.

My first incubator I made for bobwhite eggs when I was about 12.  It was a gallon plastic pickle jar with a Christmas ornament light bulb popped in a hole I drilled in the side.  I hatched eggs with it but it wasn’t very reliable.  I had styrofoam incubators I used to hatch a few chicken eggs but I wanted to start raising quail.

Raising quail means that you have to incubate eggs and I had already run out of space in my incubator.

I looked at the Sportsman series of incubators but at 700 dollars each, I didn’t have the budget for it.  I looked on

Craigslist and found a few old antique cedar incubators that needed rebuilding.  That wasn’t really a viable option either as they would need so much work.  I decided to break out the table saw and build my own. 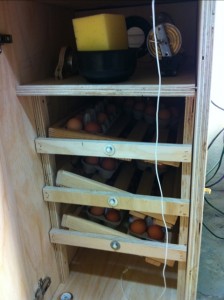 There are a lot of old incubators out there to model your own build after.  Cedar would have been a better option and I thought that plywood wouldn’t breathe and would get moldy.  After using it for a year and hatching a thousand chicks I never had an issue.

I cut down one full sheet of 15/16th plywood so that I could do it with one sheet.  There wasn’t much left to throw in the scrap pile and luckily I didn’t make any mistakes when making my cuts.  I simply counted out how many panels I needed to make and did some basic math, but you can eyeball the layout to start with if you really want to be quick about building your own incubator for chicken, quail, or any other eggs (I hatched duck eggs and quail eggs too with this incubator). 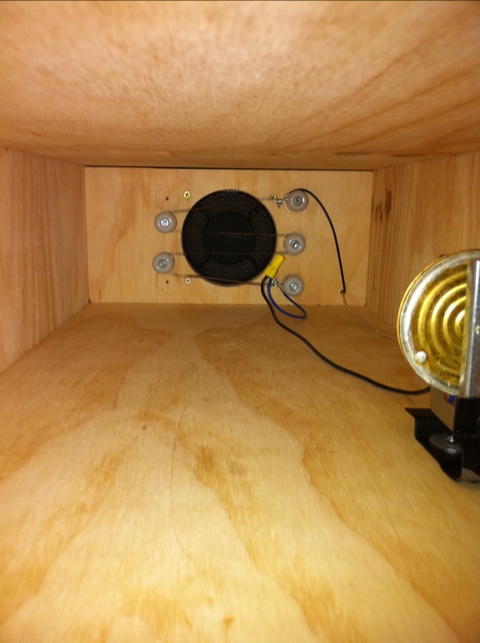 Wiring the incubator heating element and the thermostat was the hardest part.  Bare exposed heating wire seemed like a bad idea, but almost all models had the same heating element setup, even new modern commercially available models.  Some had a 1/2 inch hardware cloth screen to keep your hands and other items away from the electrically charged and hot heating element, but most did not.

There are several options in wiring, but I chose to use the single thermostat method to cut down on cost and increase simplicity.  The two thermostat system is designed as a fail safe in the event one wafer quits working.  With the single thermostat if the thermostat quits working, the whole thing malfunctions without a failsafe.  Wiring is pretty simple but you should get wiring instructions from your electrical component suppliers to make certain that they get wired properly.

Incubator Ventilation Inside and Out

Ventilation is important in an incubator but it isn’t as intuitive as I first thought.  The fan and heater section needs a good space in the back of the element to push down the warmed air.  Initially, I had a narrow space for air to circulate but with some testing in various areas, the internal temperatures weren’t consistent enough and I opened the entire back shelf up two and a half inches which increased airflow significantly.  With research into other incubator designs, there were always vents for outside air.  It seems counterproductive to vent outside which would release heat but with better outside venting the internal temperature were

With research into other incubator designs, there were always vents for outside air.  It seems counterproductive to vent outside which would release heat but with better outside venting the internal temperature were more even.  Fresh air is probably better than stale incubator air also, so I added several 1/2 inch holes to each side.  This improved the overall function and even temperature throughout the inside as well. 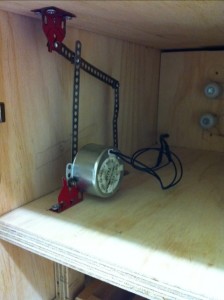 The next obstacle to overcome was the turners and hatching area.  I decided to make a turner that I could manually turn several times a day to keep it simple.  After thinking about this for a few minutes after I built the rack for the turner I knew that I’d have a hard time making sure I turned them properly every single time.

Rummaging through parts I had I ran across some Erector set parts so I decided to use them along with an actual turner motor.  After rigging everything up and doing my mock up for the angles back and forth I figured out how far it should tilt each cycle.  In order to make the incubator the most versatile, I avoided egg racks and used a flat box.  This made it possible to use egg cartons for chicken, duck, quail, or even ratite eggs like ostrich or emu.

I had an ongoing rotation of eggs and hatched chicken and quail eggs together in separate bins.  I’d use plastic trays in the bottom to hatch with for the last few days, depending on whether they were chicken or quail eggs.  Ducks I hatched by themselves as they require different parameters than chicken and quail do.  Using trays also was more hygienic than letting them hatch in egg cartons where they were free to roam about the floor and litter it with droppings.

Cleaning was pretty easy overall even though the plywood was porous.  There was no sealer or oil put on the wood inside or out.  I don’t believe that it breathed much at all aside from the ventilation holes I added though.  Spraying with Lysol thoroughly after a thorough wipe down between runs or when it was empty was my protocol and I never had trouble with any of the chicks as far s disease goes.

Overall it was an economic solution and a pretty decent incubator and hatcher.  It produced a lot of healthy chicks and I didn’t have any problems with it.  Once I got the thermostat set properly and it levelled out after a day of running it was good to go.  I didn’t need constant adjustments to temperature or humidity.  The only problem really was the humidity tray needing to be refilled every few days but it wasn’t a real problem for me to fill it with warm water regularly so I never designed anything to top off the water by itself.

Plywood: $26.00
Heating element $20
Thermostat $20
Used Fan and cord from metal box heater (bought new from department store) $6
Hinges $6
Rubber Feet buttons $2.50
$80.50
Additionally, I used some wire nuts I had laying around and wire I had left over from other projects.