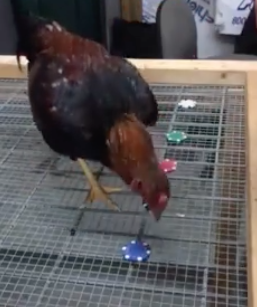 You Won’t Believe This Chickens Talent 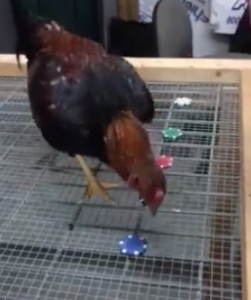 I played Tic Tac Toe with a chicken, and lost. Several times. We were traveling through Cherokee, North Carolina as a kid and stopped somewhere to take a break. Of course tourist attractions were everywhere but how’s a 10 year old kid supposed to resist playing Tic Tac Toe with a rooster?

When that story comes up most people don’t believe it. They think chickens are some stupid bird that drops eggs of their butt, and that’s about it. However they can be taught and do in fact have a pretty good memory.

Mike Suttle has trained a chicken to peck at a certain color poker chip by positive reinforcement. “He is never corrected for offering the wrong behavior,” Mike says, “that behavior is simply ignored and because of behavior economics he stops offering behaviors that don’t get reinforced.”

This type of training is called successive approximation and is used in many animal training tasks. Simply put there is a series of positive reinforcement in successive steps to get to the final learned task. There may be a few steps, or there maybe be many learning procedures to the final task, but eventually the animal will learn.

While this is not a game of Tic Tac Toe, most likely the interface used between man and chicken had some similar mechanism. After every game I lost to that rooster he won a small amount of feed from a cup that dropped in. With some patience and time you can apply this same training technique for all sorts of tasks.

Previous Building a Better Columbian
Next Green Roof for the Coop?