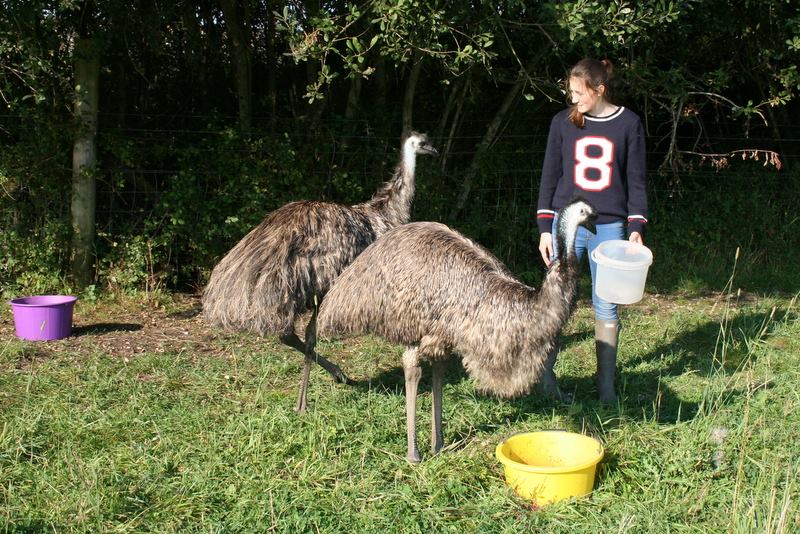 An Experience With Emus 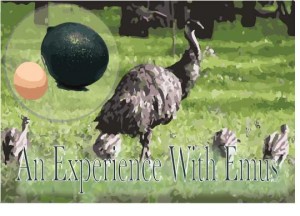 My emus eat mostly grass, though they also have a staple ration of ratite pellets every day, and slightly more in the winter when the grass is worse. They will also eat blackberries, and anything else that takes their fancy so you have to make sure they can’t get to anything that could potentially harm them.

Additionally they do require quite sturdy high fencing/ fencing and hedgerows. When they’re particularly excited or if they’re startled they can pick up quite a bit of speed and can accidentally run into fencing. For this reason poultry netting or electric tape isn’t suitable as they can get caught up in it and hurt themselves.

My emus don’t like shelters and live out in all types of weather, be it snow, rain, or sun. They prefer to shelter under the trees or up in the hedgerows instead. I have heard other people’s emus do like a shelter so I guess it depends on the birds.

They have lived with my chickens and live with cattle in the summer. They’re very nosey and will follow people around and pick things up and run off with them! When they had access to the farm yard they enjoyed “helping” everyone with what they were doing. 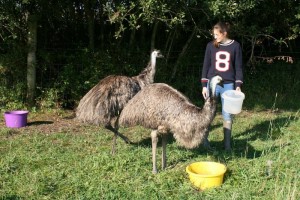 They’re good protection from other animals such as foxes, mine don’t tolerate dogs or cats and will chase them and jump at them. You have to be careful what you let in with them. I wouldn’t trust them with small children either, as the emus are too unpredictable and children can act inappropriately around them and agitate them.

Although I keep my emus as I would livestock they’re still very much part of the family.  My hand reared male will cuddle with people even falling asleep sometimes.  He comes when he’s called and will chase a ball. My female which I bought from another breeder wasn’t hand reared but over the last 18 months will feed from my hand and allow me to stroke her now that she trusts me more.

If you choose to keeps emus you’ll need a couple of people confident enough to handle them with you. If you need to move them or treat them if they hurt themselves you will need an assistant.  My vets aren’t too keen on treating them themselves so its our responsibility to treat them if they get injured.

Emus can’t be herded like you’d herd cattle or sheep, when they’re scared or confined they’ll simply run in any direction. This could be straight towards you or over a fence et cetera.  I‘ve found the best policy is to have them follow me to where I’d like them to go. This works when I just want to move them between fields. Although when putting them in a trailer to be moved up the road they need a couple of very confident people to help you push them up in. 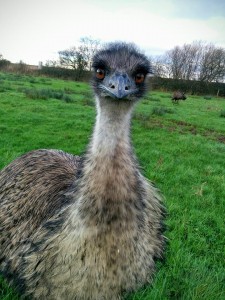 Emus are wild animals and they can be dangerous as can any large animal. They should therefore be treated respectfully and you should be equally as wary of them as you would be a cow for example. Although most of the time they’re quite contented, when scared they can run into you by accident or kick you.

Emus can live for up to 30 years, and females have been known to lay for nearly 20 years of their lives. Emus are usually kept in pairs and the female is usually the most domineering, with the male typically being the most friendly and the female more aloof. They reach maturity at about 3 years old, some sooner, some later and it’s the male that would incubate and hatch the eggs.

The emu breeding season is between December and April, the female may lay between 20 -30 eggs during this time weighing in the region of 500g – 680g. They can take between 52 – 58 days to hatch at a temperature between 35 – 37.2 degrees C with 36.4 degrees C being the preferred temperature and a humidity no higher than 30%. My emus hatched at 20% humidity without any problem. The eggs will need to be turned a minimum of 3 times a day,  rolling the egg over by 180degrees. 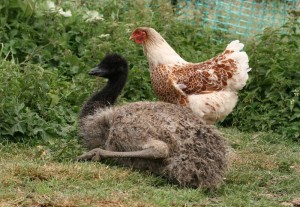 Emu eggs are too thick to be candled to track embryo growth, instead it is recommended you track the weight change throughout incubation. An emu egg with a developing embryo should lose almost 15% of their weight during this time at a steady rate. Further information about emu hatching can be found on backyardchickens.com in an article written by yinepu: http://www.backyardchickens.com/a/emu-hatch

Although the UK government says a pair of emus can be kept on 1/10th an acre I personally don’t think they should be. They enjoy running and will lap one of our 6 acre fields quite easily. They like water too, and like to submerge themselves particularly in the summer.

Here’s a video of my two running around a couple of years ago to give you an idea of the ground they can cover and the speed:  https://www.youtube.com/watch?v=ziykLjQJ5Fs