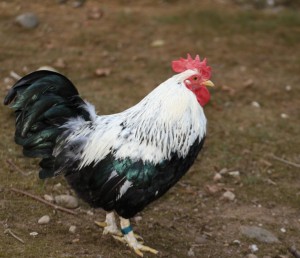 The Silver Duckwing Welsummer Bantam is a fairly heavy bodied breed for a bantam. It is not as stocky as the Cornish bantam or perhaps even the white rock bantam, but it isn’t too far behind. The bird feels plump in your hand but isn’t overly meaty.The egg size of the Silver Duckwing Welsummer Bantam isn’t all too bad for the size of the bird. It is a medium size egg of a medium brown color. Unfortunately the dark terra cotta brown eggshell of the large fowl isn’t shared with the bantam breed. Overall it is a nice egg for the size of the bird.

The silver duckwing rooster is a strikingly colorful and graceful appearing bird. The head, neck, and hackles are white. The breast is black with some white mottling. The abdomen and thigh fluff are black with white mottling.

The hens head is a silvery white. A hen’s hackle is also a silvery white and the lower feathers have a nice black striping and white shaft. The breast should be a nice salmon or robin red. The tail feathers are black with the outer feathers penciled with white.

In both the rooster and the hen the beak should be a yellow or horn. Eyes should be red. The Silver Duckwing Welsummer Bantam’s comb, face, ear lobes and wattles are a bright red. The legs and feet yellow. Undercolour is dark slate grey.

The welsummer was developed at the same time as the Barnevelder, around the early 1900′s, in Holland. Partridge colored leghorns, Wyandotte, and cochins, among other breeds were the basis of the Welsummer. They were developed in black red, and also the silver duckwing, and gold duckwing in large fowl. At some point bantams were developed. It is unclear when bantams in these colors appeared first.

The Silver Duckwing Welsummer Bantam strain I have came into the United States through Canada a few years ago by the way of Erhard Weihs at Kummer Poultry. Erhard is a longtime Welsummer breeder in the US and has some very nice German bloodlines in his birds. The breed had been brought into Canada from Germany and has been bred in Germany for many generations. They remain rare in the United States and I only know of the one line although there may be other lines of Silver Duckwing Welsummer Bantams here in America.

These bantams handle confinement surprisingly well. They are very quiet birds and do not exhibit nervous and flighty behavior that is characteristic of the Mediterranean breeds that I am familiar with. They do not seem to fight much amongst themselves or make unnecessary noise. They are easy to handle and don’t seem to mind terribly being picked up and held. They are also a very good constituent for being free ranged. Even a small city lot of a several hundred square feet would be welcomed to them. 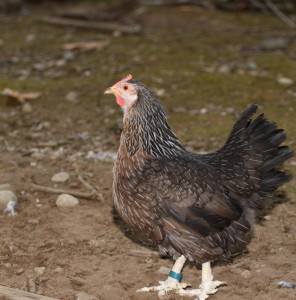 The Silver Duckwing Welsummer Bantam makes an excellent urban flock. They are big enough to get the job done, but compact enough to make the most out of limited room that an urban lot may lack compared to a countryside homestead. The bantam isn’t as large a bird as the large fowl varieties, so it won’t each as much and will grow to maturity slightly faster than the bigger models.

The bantams are notorious for being overly broody but the Welsummer bantams are not broody to the point of lacking utility. If need be the hen can hatch a clutch of chicks in time for spring. If you keep the eggs collected daily they won’t tend to be as broody as they could potentially be.

Welsummers are not true autosexing birds but can be distinguished from hatching whether or not they are pullets or cockerels. In the chicks it is apparent that the pullets will have a very well defined ‘V’ shaped marking on their head, and their eyes have lines similar to eyeliner. The cockerels lack the lines about the eyes. Aside from lacking the eyeliner, the ‘V’ is not as defined, and appears to be smudged. At hatching is it easy to mark the pullets and roosters so you can decide to grow them out or get rid of them instead of feeding them if you wanted only hens.

I am quite happy with this breed. The breed has decent growth, fills out fair, lays a good amount of medium eggs, and it is friendly. It isn’t bad to look at either. Adding some to your urban or rural flock would be a good idea.