Feeding sprouted grain is a very economical method of supplying green feed to all classes of poultry. Fodder, as green feeds are also called, supply nutrients that are easier to absorb for your poultry.  Dried grains ready for sprouting are convenient to buy and store.

The feed value of the grains change when sprouting happens. When grain begins to sprout and grow there is an increase in vitamin and protein percentage wise.  The reason for this is the starch is used to support the new sprout.A grains seed contains complex compounds which are difficult to digest.  When they are sprouted they become a more simple compound, which makes them more readily available.   Their digestive system has an easier time using the nutrients as it doesn’t have to work as hard.

Sprouted grains provide more nutrients, when sprouted minerals merge with proteins to allow better function.  An increase in the amino acid Lysine has been found in sprouting. Higher Lysine levels have been found to raise egg production in hens.

Vitamins A, E, and C as well as B complex are generally good in sprouting.  Vitamin C minimizes sperm defects in roosters and should raise your hatch rate if there is a deficiency.  Vitamin C also helps interior egg quality.  The vitamin C in sprouted grains also aids in the health of stressed birds.

Sprouting grains should only be fed as a supplement.  It does not have enough total nutrients for a complete diet.  Therefore adding sprouted grains as free choice is the best option. In the winter time your birds will need extra energy and nutrition to maintain a healthy body temperature.  Winter months will show the greatest returns on your sprouted grain.

Sprouting Racks  Clean grains are placed in a tray or pail.  Fill the container with water at a temperature that’s no hotter than 100° F. The water should feel hot but not painful on your hand.  The oats are allowed to soak in this in a warm room from six or eight hours up to forty- eight hours.

Next they are drained and poured on a tray of the sprouting rack to a thickness of no more than one inch. The sprouting rack used can be homemade. A rack holding a stack of trays will be most convenient but if space is limited you can place them about in different locations.

The rack is kept in a room where the temperature is no cooler than 60° F.  The sprouting oats are thoroughly sprinkled with water twice a day.  They should be moist but not hold water or they may mold or go sour.  Drain off any excess moisture.

The grain should be mixed and moved around gently.  A small garden rake or a similar tool is better than doing so by hand.  Mixing by hand tends to tamp down the grain.  You want a root mat that is light and as airy as possible.  Aeration in the root pad will help keep mold and souring from occurring.  It will help in the growth and health of the grain as well.

During the soaking and sprouting period  the grain will have gained about three and a half times their original weight.  Not only has it gained water during this time but the nutrients are becoming more available.

In a week to ten days, depending on the temperature of the room, the sprouts reach their best development, which is from four to six inches.  Different grains take different amounts of time to germinate as well so keep that in mind when planning your green feed.

Young tender sprouts are best to feed chicks.  Grains that are sprouted one or two inches tall are best for baby chicks.  After that they may become too tough and fibrous for them.  Once your sprouts reach six inches they should be fed to your birds.  Waiting longer than six inches lowers the nourishment in the seed and grass.

It is best to use trays that can be fed whole to your birds.  Using a partial tray will make more worry unless you can split it for two days.  This will make it slightly easier as you will only need to make one new tray every other day.

The sprouting grasses are very palatable, being eaten usually by every bird in the flock. It has been tried successfully, in some cases with sick birds, which would not eat grain.

Buckets  On average 5 or 6 buckets should work well for a small backyard flock of five or six birds depending on their size.  If you have an excess of sprouts then reduce the size of your containers to better suit your needs.

Every day start a new bucket.  In an empty bucket place the grain in the bottom to an inch thick.  Rinse out the grain like you would in any other method.  Make sure the room temperature is above 60 degrees.

Daily rinse the seeds and drain them thoroughly.  Using a small rake or similar tool  separate the seeds gently to aerate the sprouts.  The sprouts should be light and not packed.  The idea is to keep air space between the seeds.  This reduces mold and souring.  You want the sprouts moist but not wet.

When the grass roots have formed a mat there is no more need to rake the seeds.  After watering the mat can be removed from the tray to drain he excess water off.  The mat can be placed back into the moist tray.

When the buckets have grown to the appropriate height they may be fed to the birds. The entire mat can be removed form the bucket and taken to the chickens feeder.  Any uneaten sprouts should be removed.

The empty bucket should be rinsed well before adding new seed.  If mold is a problem a mixture of 1 percent bleach can be used to rinse the bucket and seeds the first time.

To scale your sprouted grain to your flock you can use a suitable container for a single serving.  Nursery flats, deli containers, buckets, and trays of various sizes work well.  Some may find that more than one container per day will work for them. 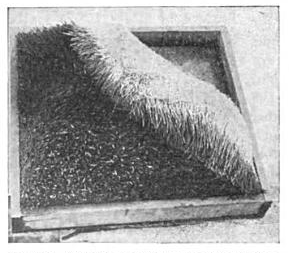 (1)  Sprouted grains change their nutritional value and retain their natural enzymes.  These enzymes are good for digestion and act as antioxidants.

(2) Sprouting of oats for feeding is a simple process, requiring little time and attention, and in every case results are certain. A sprouting program can be adjusted for your flock size.

(3) Grains prepared and fed to laying birds are very palatable and satisfying, much more so than when fed as whole grain.

(4) This is the most economical method of feeding grain, about 3 ½ pounds of green feed being sprouted from every one pound of dry grain. When sprouted grain is fed to the birds regularly an increase in production will occur.

(5) Sprouted grains are a very efficient source of feed compared with other feed which could be stored or pelletized. It is more readily absorbed and utilized by poultry to help repair  damaged cells.

Oats As a feed for poultry, oats probably rank next to corn and wheat. Oats are commonly available.  When buying oats to sprout make sure they are whole oats that have not been husked.

Wheat The wheat berry has healthy benefits for man, and the abundance of chlorophyll is good for your birds as well.  There have been several studies with sprouted wheat that were successful with broiler chickens and layers alike.  The studies show that the birds often produced more eggs and put on more weight when offered sprouted grasses.

Barley This is a suitable feed for nearly all classes of poultry and is a good substitute for corn. It is nearly equal in feeding value. It is usually fed whole with other grains as a scratch ration. The carbohydrates in barley are greater than those found in oats and less than those found in corn. It has less fat than oats or corn.

Other Green Feed Legumes, such as cowpeas and field peas sprout and grow faster than grains.  Possibilities are wide in sprouting.  There are some seeds and sprouts that are not suitable, some even are poisonous sprouted or in seed form.  Do some research before spouting and feeding seeds you are unsure about.  Corn, millet, sunflowers, and other such seed will normally sprout and be sufficient to supplement your chicken diets.

Sprouting grains can be mixed with other grains or legumes to round out a feeding plan.  Mixing several peas and grains in sprouting containers will allow you to tailor your carbohydrate and protein levels if you wish to do so.  Simply adding more variety will invariably make for a more complete diet and healthier bird.

Green sprouted feeds are a great way to extend your feed and save on your feed bill.  It offers a change in diet over the winter when mostly whole grains or pellets are fed.  It makes the seeds nutrients more readily usable.  It is good for the birds and it’s good for your feed bill.