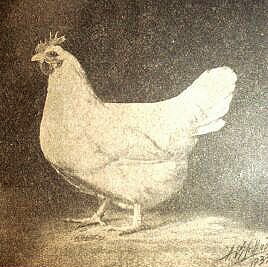 In the 1920s a new breed of chicken was being developed by the United States Department of Agriculture. After the breed was fixed and established it was released to universities where it was dispensed to private owners from there. There still was a small amount of work to be done on this new breed but for the most part a new chicken breed had been developed and released.

The Lamona breed was a large white feathered chicken that laid a white egg. The flesh of this new bird was supposed to be tender and the eggs were to be laid year-round. You can start to imagine why a bird like this would be valuable to everyone who had chickens.

He used the Dorking for its large size and palatable table flesh. The white rock was used for its bulky size and ability to lay eggs year-round. The white leghorn added it’s prominent egg laying ability as well as it’s white feathers. Together, the leghorn and the white rock mad the carcass a nice clean looking bird. The white pinfeathers look better if they are missed during processing.

In the world of chickens it is the rooster that passes down the egg laying ability of it’s a breed. Therefore it was a rooster that was used of both breeds of white birds, the white rock and the white leghorn. The hen of the Dorking was used to carry those genes to the next generation that would be used to breed the new Lamona.

Using the Gregor Mandel genetics the offspring of the initial matings were carefully selected and further used to forward the breed idea. At the time the Mandel genetics idea was relatively new and was only about 50 years old. This was one of the first experiments that would use his system of genetics to produce a new breed. This was much more scientific than the breeds that had been developed in the past. This is why it was of such scientific significance in the early 1920s.

The new Lamona breed would hatch from its shell with a red earlobe. This was something that had traditionally been reserved for brown egg laying birds. Many people said that the red ear lobe could not be set into the Lemona chicken. Lamon tried and did accomplish this feat. After 11 years of breeding true for the most part the breed was fixed and bred true.

The body of the bird is long and blocky. The weight is about 4 to 6 pounds and produces a good proportion of its carcass in breast meat ready for the table. It is larger than the leghorn and is about the size of most other American breeds such as wyandottes and other rocks.

There have been so many great new breeds of chickens developed especially in the early half of the 19th century that we have lost. Through loss of interest and commercial breeding birds such as the Cornish Cross and commercial strains of the leghorn, They have fallen by the wayside.

There are still people that entertain keeping the Lamona and continuing and working on the breed. They are very close to becoming extinct as not many people keep them. In keeping breeds that are so highly endangered it is very important not to cross them but to keep the lineage and work on their type and producing abilities.