Farmers Market at Your Fingertips 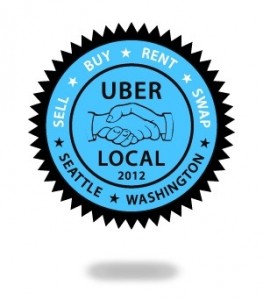 Local small food producers are soon to be having a convenient and easy to use mobile device application. The movement in local food has been growing greatly over the last decade. The oil price and food price graph correlate strongly to each other.

Kamal Patel and his group at Uber Local have developed a new means to locate locally produced food in your own neighborhood. It is a mobile device application, an app. You now literally hold the solution to the globalization of our food supply in your hand.

“Sellers would be able to list their foods and other resources produced locally. We are calling it the Etsy of food production,” Kamal tells me at a table at Cloud City Coffee, an independent cafe in my Mapleleaf neighborhood that already has locally sourced goods.

The business model is currently being worked out and will include a mobile device app. “It will be an incubator for micro producers,” Kamal explains as he shows me the slick looking app on his phone. “Buyers would be able to search or filter foods and leave ratings for sellers.”

The Uber Local app would be a great way to interact with your neighborhood and get locally grown food close by. You would also be able to sell and trade locally grown food. Tools and services would be offered in future releases as the app is expanded and updated.

Seattle recently passed a cottage food act that lets artisans sell the lesser perishable foods from their home. A license would need to be obtained to sell such things as jellies, jams, artisan breads, honey and foods of that nature. This is to complement the existing ability to sell local grown urban vegetables that had passed previously. The city of Seattle expects to see 1000 license applicants in the first year.

“Democratization and decentralization of food should be an important part of our society,” Kamal tells me. I agree. As it is now the majority of food production lies within major corporations. Local food is hard to source and obtain. This makes us rely solely on commercial production of food to sustain the nations lifeline. “Farmers markets are not always available in a neighborhood. They may be too far away.” This is where Uber Local steps in.

Uber Local would allow users to get a manageable amount of produce and goods from their own neighborhood and local areas. Kamal adds a good point, “A CSA is good but some people may have difficulties using an entire box of food before it goes to waste.” The app has a lot of flexibility in finding in-season produce that does not have to be shipped across the state, country, or the world. You can buy what you need in a manageable amount and do something good for the economy and ecology.

Buyers would be able to look through the well designed app and see what is offered. The last product posted is the first product shown by default. If you were looking for rhubarb you would be able to search “rhubarb” and see if you have any local producers with available rhubarb in your neighborhood. You find a producer and soon you’re at home making rhubarb pie.

“Now I need to get producers interested and get them ready to grow extra for our launch in the spring,” Kamal explains. “The other route I am going to take is get restaurants and local stores on board to show our decal in the windows if they are supporting Uber Local producers and makers. Another front will be home bakers.”

The first version of the app will be a basic form to find and sell produce and other cottage made local foods. Future versions of the program may make it possible to find or rent out gardening space, supplies, and tools.

“It’s a really good idea,” says Joe Albin, a potential buyer and seller that could sell snacks using Uber Local. “It’s like a farmers market on your phone.”

Local food greatly cuts down on the dependency of oil to bring food to our tables. This new app would supply the tools necessary to begin growing, selling, trading, and enjoying in-season locally grown food. It will bring back a part of our society that was lost in the beginning of the 20th century. After the end of World War II our food supply became more and more distant to us as oil became what really brought food to our tables.

Its time we got back to producing and consuming more of our own food. Uber Local will allow us to easily buy, sell, and trade local food easily. Look for Uber Local in the spring. To get more detailed information you can visit UberLocal.org to stay updated.